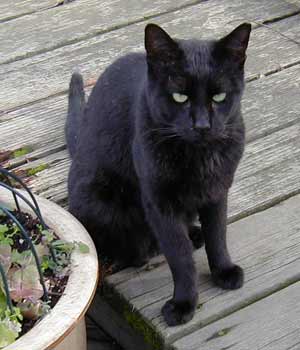 We buried Blackie this morning, out in the rose garden where we found him, next to Thevenin. 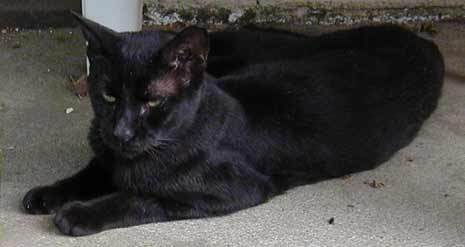 In the photo above, taken Sept. 1, 2006, he’s still filling out after nearly starving. None of these photos capture his personality. He looks so sedate.

He loved to run. He’d play pretend-scared, too, hiding under the car when we walked past then bounding after us.

And he could not sit still. He’d cry till I let him on my lap, then he’d wiggle and change position and bump his head against me, and finally he’d get down to go do something else.

Sydney hated him. He loved her, and I think he picked our yard because of her. She used to come in from the far end of the yard crying to us, and he made that same cry to her. She just hissed at him. We started calling her the Hater because she always was giving him the evil eye. Every time she had to go near him, even if he was sleeping, she hissed at him.

Before Blackie came, Hobbes was so quiet it felt like she was getting ready to die. She’s 17 or 18 now. After he came, she perked up. He would make a fuss over her, rubbing noses, trying to bump heads with her, and sleeping next to her. She started patrolling parts of the yard she hadn’t been in for what seems like years.

When strange neighborhood cats came in our yard, Blackie wanted to be their friend. I couldn’t believe it the day I saw him go up to some new tom and rub noses.

He was a drooler. I’d never known a drooling cat before. If he wasn’t drooling, you weren’t really petting him. Petting him made him have to go poop, too.

He was Siamese, and he talked whenever he wanted anything. He fussed! He’d cry for some attention. Give him some noogies and he’d go away happy, for awhile anyway.

No matter how we scolded him, he’d go after the birds. He’d lie there on the ground behind the latticework by the bird feeder, thinking he was slick and they couldn’t see him. I caught him one time eating a bird. He covered it with his paws and tried to pretend he didn’t have anything. Last summer he started taking his naps in the wheelbarrow by the bird feeder. Ha! They got him multiple times. It’s hard getting bird poop out of cat fur.

Sydney and Hobbes seem more unsettled with his death than they did even after Thevenin died. My husband says Sydney was the yin to Blackie’s yang. Who will Sydney hate now?

The picture below almost shows his glow-in-the-dark eyes. He would be invisible till he opened his eyes. Spooky kitty.

I already miss him. 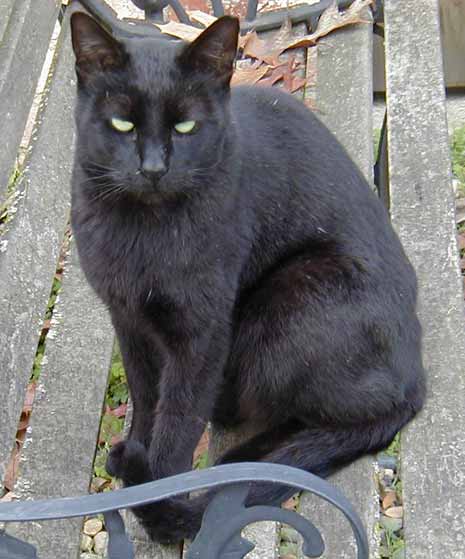 Tags: Blackie | Filed in The Cats