My daughter and her cat Stella have been gone for a few months now. Kitty drama has settled down somewhat: Sydney hates Blackie, but she has managed not to charge him more than a couple of times. It helps that we try to maintain at least two feet of separation at all times. A door works well, too.

What doesn’t help is that Blackie can’t understand why Sydney doesn’t want to be his friend. Aren’t they part of the same pride? He still does the call, checking out where the other cats are, but she has quit her yowling as she comes in from the back because he’s more likely to answer her than I am. 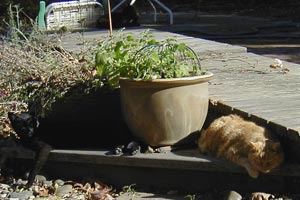 Amazing! A photo of the three cats together. (Sydney is at the upper edge next to the deck chair.)