Sometimes her weirdness has a reason

My little friend likes to weird me out at times. More than once she’s stared at a blank wall or at an empty spot on the floor, or attacked the remains of a houseplant that was giving her the evil eye.

Sydney did it again this morning. She stared out through the screen door into the backyard. The first time I humored her and went outside. Maybe one of those freeloading cats was out there. Nope, nothing.

She settled down when I came back in, but then a while later she had to jump down from my lap and go stare out the door again. What a neurotic animal. 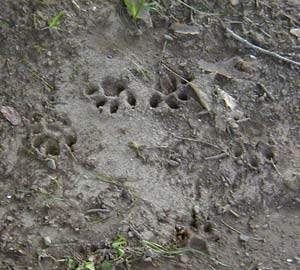 These tracks were left under the tree.

Then my husband comes back in the house after feeding the birds and got out the binoculars. “There’s a raccoon in the second oak.”

It was sitting on a branch cleaning itself. If I were Sydney I’d be upset, too; the raccoon was at least three times her size. But, geez, she’s got the spastic act down so well it’s hard to know when to take her seriously.

Tags: Sydney | Filed in The Cats