I used to love watching old black-and-white movies from the 1930s and ’40s. The clothes were beautiful. The women were bright and witty.

Nearly every Saturday I’d go to town with my mother, where we’d visit the little hole-in-the-wall used bookstore. She’d stock up on Harlequins and I’d get new Nancy Drews, Dana Girls, and Judy Boltons. They cost 60 cents then. (Huh. I completed my series of Judy Boltons a few years ago, and the books cost $6 and up now.)

I enjoyed the older books the best. I always checked the copyright page on the Nancy Drews. The newer books just didn’t have any flavor.

What a delight it was when I finished reading M. Ruth Myers’ The Whiskey Tide on my Kindle and saw the promo chapter for No Game for a Dame. I think I read just one paragraph before I downloaded it.

Although I read mostly fantasy now, mystery was my first love. And I love the Maggie Sullivan mysteries. There’s all the atmosphere of period hardboiled detective novels but better. The heroine is smart, tough, and worldly-wise without being cynical, and she has friends among the other women in the boarding house where she lives.

Reading the Maggie Sullivan mysteries is like reading an old Judy Bolton. Myers doesn’t just use period language but also knows what the houses and streets and backyards look like. Really, it’s like reading a fantasy in that I’m pulled into a completely different world.

There are only three Maggie Sullivan mysteries so far: No Game for a Dame, Tough Cookie, Don’t Dare a Dame. I hope there will be many more!

BFFs I finished reading in 2013

I read five big fat fantasy series this year! A few years ago I read the first books of a couple of big fat fantasy series, and this year I finally finished those two series, Greg Keyes’ Kingdoms of Thorn and Bone and Daniel Abraham’s Long Price Quartet. I also read Patty Jansen’s Icefire Trilogy and C. S. Friedman’s Magister Trilogy, and I’m going to count Lindsay Buroker’s Emperor’s Edge series even though I read most of those books in 2012.

I enjoyed the first book of Kingdoms of Thorn and Bone, The Briar King, and was really looking forward to the rest of the series. Uh oh. The next two books were pretty good too, but the final book was sheer WTFery. A major plot thread was abandoned, and the ending was rushed and inconclusive. I have no idea what happened. Did the author get tired of the book? Did he need more time? It’s really disappointing when a series crashes.

The Magister Trilogy ended on a disappointing note also. The first book raised a major question about the morality of fueling magic with people’s lives, and the subject was completely dropped at the end. Now that the protagonist was recognized as a mage (nothing unexpected there, huh?), everything was hunky dory. Maybe that was the point of the series — that the rules change when you’re the one with the power — but if so the point was extremely subtle, so subtle I’m more likely to believe the author forgot the question raised in the first book. Bah.

I enjoyed the Long Price Quartet much more than the other two I just mentioned. I had forgotten much of what happened in A Shadow in Summer (but I still remember all the seeds dropping loudly on the stone floor; that was a great scene full of sensory detail), but there was just enough recap that I was able to recall events and people. The author let his characters remain true to themselves; they weren’t pushed to change to conform to story needs, and they aged naturally in body and personality. It was sad that a certain army got whupped, but what else can you really expect from someone with no military background and untrained and unarmed recruits? And this series contains the morality missing in the Magister Trilogy.

The Icefire Trilogy was fun to read, and I had to download the next book immediately finishing the one previous. The trilogy had a mostly satisfying ending. The romance of the older couple was a little abrupt and struck a false note; their actions felt forced to fit the need for a happy ending. I also was disappointed not to see a reconciliation between the brothers. What!? After all that build-up of their past conflict? That’s what I wanted to see, not some obligatory romance.

The Emperor’s Edge comprises seven books, nine if you count Encrypted and Decrypted, which really are necessary to read to enjoy the ending. Normally I’m done with a story that drags out over more than four books. I don’t know if it’s because these books were released so close together or because they were so tightly focused and didn’t keep adding plotlines and characters, but I didn’t get that “Okay, we’re done now” feeling I get midway through a never-ending series. The author pulled off a couple of tough accomplishments: (1) She managed to rehabilitate the assassin without stretching him into something unbelievable. He was emotionally stunted and remains emotionally stunted. The protag is a fixer, just about OCD with her need to clean, and he became her project. Those two people together work. (2) The boy who’s a dreamer didn’t automagically become a decisive leader. I was really primed for that to happen — it does in all the other BFFs! — but nope, the leader turned out to be someone who actually knew how to lead.

The case of the missing next book

Several years ago (actually, eleven according to my LibraryThing catalog) I read a book I very much enjoyed. The setting felt fresh and I really, really wanted to read the next book in the series. A continuation never did show up at the public library, where I had gotten the first book, and eventually I forgot about it.

Then I saw an enticing book cover in the author’s signature line on a forum, clicked on it, and discovered it was the third book in the series I had wanted to read over a decade ago. Oh joy!

The first book, Children of the Shaman, was released here in the US, but apparently the second book, The Glass Mountain, was only released in the UK. 🙁 The third book, Malarat, just came out.

I’m still waiting for the second e-book to become available, but it should be out Real Soon Now on Kindle. The author, Jessica Rydill, is releasing the e-books herself, and the covers are striking. 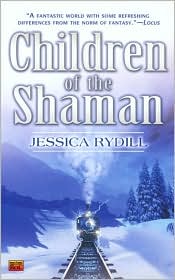 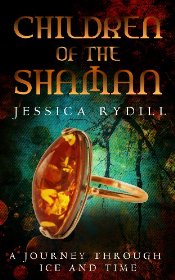 What a sad, lonely person I must appear to be. Why else would these particular messages be targeted at me? 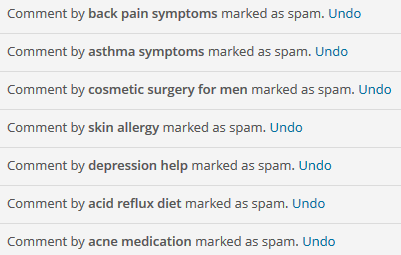 I’m so ugly they can’t tell I’m a woman. Hey, they forgot hemorrhoids.

I began the first book of the Peacebringer trilogy in 2001. Peacebringer was supposed to be a single volume, but it turned out the story was bigger than a single book.

At the time, I planned to seek a publisher. E-books weren’t viable yet (they existed, but they were invisible to the average reader). Distribution – getting in front of readers’ eyes – has always been the key to success. I knew how hard it was to get self-published books in bookstores, and I didn’t want to deal with it.

Immediately after finishing the first book, Root, I began the second, Stem. I’ve read trilogies where storylines got dropped or endings felt rushed, and I didn’t want that to happen to my story. I’m a slow writer, too, and didn’t want to feel compelled to meet a publisher’s deadline. So I decided from the beginning the entire trilogy had to be finished before I shopped it around.

Lucky me! Now I can publish myself and reach a large number of potential readers. But first I have to finish it. I’m currently one-third of the way through the first draft of Leaf. Then I have to edit Root. That will take some time. Root was the first book I ever completed, and my writing improved substantially between the first chapter and the last. After editing Root, I’ll edit the other two. Stem looked pretty clean when I last read through it, but there may be changes needed to better mesh with Leaf.

I’m optimistically looking at a publication date of 2015.