There are a few titles that stand out months after reading them: The Tower’s Alchemist, Date Night on Union Station, Iron Magic, The Sound of Footsteps, Earthrise, and Just One Damned Thing After Another, but most of these books were good enough to keep my interest until I finished them.

I really, really wish I had more time to read. END_OF_DOCUMENT_TOKEN_TO_BE_REPLACED

The tipping point for me has been reached. Every book I read for pleasure this year was an ebook. I think I visited the library one time, and that was for a meeting.

It feels like the quality of books I’ve been finding is better now, too. And here’s the list, in alpha order by author’s last name.
END_OF_DOCUMENT_TOKEN_TO_BE_REPLACED

An excerpt from Chapter 3, Stem, Book 2 of the Peacebringer Trilogy

FIRST DRAFT – to be revised and copyedited She wasn’t sorry. She wasn’t! Dad could call her into his office after supper to lecture her–You can’t talk to your aunt like that, he said, rambling on about being respectful to elders and when she was older blah blah blah–but he wouldn’t stop Auntie Nee from being so hateful to Jazlin. What about respect for Jazlin? Shouldn’t elders have to treat other people with respect? He didn’t have an answer for that, just a tired sigh, and she almost felt guilty, seeing how his shoulders slumped. Almost.

She unclenched her hand, wiped her palm on her dungarees, and went back into the kitchen. Jazlin turned from scrubbing down the tin counter next to the sink, a question in her eyes. Mareya shrugged meaningfully: later.

Domita paused in mid wipe of the big wooden bowl, the dishtowel dangling forgotten. “What did Daddy want?” END_OF_DOCUMENT_TOKEN_TO_BE_REPLACED

Last week’s stop was hosted by S. Elliot Brandis. He has studied both psychology and engineering, and can tell you not only how they built that bridge, but why they felt the need to in the first place. Or so he would have you believe.

He has recently published Irradiated, a tale of two sisters living in Brisbane, Australia, post-civilization. He invites you to visit him at selliotbrandis.com.

What am I working on?

I’m in the middle of Leaf, the last book of the Peacebringer Trilogy. I’ve been living with this trilogy since 2001, so I’m quite ready for it to be finished, much as I enjoy spending time with the characters.

Leaf has seven viewpoint characters spread out across two countries, and every chapter when I switch characters I have to relearn their speech patterns and ways of thinking. My next full-length novel will have one viewpoint character and will be written in first person, I swear.

Anyway. The underlying premise of the trilogy is that a bunch of black people say to heck with Earth, pile onto a generation ship, and settle on a planet that turns out be inhabited with elf analogues. Ooops.

A few centuries later, the settlers and the indigenes co-exist peacefully, as long as everyone keeps to their own side of the river. Then one of the settlers finds an indigene child in settler territory, and the settlers have to decide whether to send the child back to possible death, or to shelter the child and face possible reprisal by the indigenes.

How does my work differ from others of its genre?

Although there is a science fiction/colonization starting point, the trilogy is solidly second-world fantasy | high fantasy | epic fantasy (pick your favorite term). The events, which take place on an imaginary world, are, if not global, at least national in scope; the world of the indigenes is out of balance, and the indigene child must put the world back in balance.

But there are no big battle scenes; nobody casts fireballs or wields a magic sword. The magic is invisible to most people and doesn’t have a “system.” Despite centuries of living side by side, most settlers don’t recognize the indigene magic, or even their own.

The landscape and culture aren’t derived from medieval Europe; the settlers are descendants of Americans.

Why do I write what I do?

Because it interests me.

And because I’m lazy. I like writing fantasy because I don’t have to make sure Smith Street runs north-south and is only twelve blocks long. I don’t have to worry about knowing where the boundaries of X country were in 1347, or what the country was called at the time. I don’t have to know what laws were in effect in 1908 Nebraska, or what radio stations existed in Chicago in 1932.

All I have to do is make up the people and their problems and the world they live in.

How does my writing process work?

When I first started Peacebringer, I didn’t know what was going to happen or the characters I would write about. I just had a character (the lost child) and the situation (her being found by an enemy), and I kept making up stuff that sort of fit. It wasn’t till the third chapter I knew who the lost child’s parents were, and then a few chapters later I learned why the father and child were in the forest. Stuff started to fall in place, a little bit at a time.

Eventually I was able to list the events I knew would happen into a loose outline. Now I work from this outline, adjusting as I go.

I have another book in the same world planned, and for that one I have a main character with backstory, an incident that connects the protagonist to a second character (not a romantic interest), and then they go off on a journey and I don’t know what the heck happens. I’m pretty sure they meet someone from the protag’s past along the way, but I’m not sure yet. Guess I’ll just have to start writing. 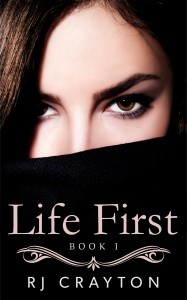 Don’t miss next week’s visit with RJ Crayton, author of Life First, a chilling story about a future when your body no longer belongs to you.

R.J. Crayton grew up in Illinois and now lives in the Maryland suburbs of Washington, DC. She is the author of the Life First series of novels, which includes Life First and Second Life. Prior to writing fiction, Crayton was a journalist, and wrote for the Wichita Eagle, Kansas City Star, and Education Technology News. Currently, Crayton is a monthly contributor to the Indies Unlimited blog and a regular contributor to the Institute for Ethics and Emerging Technologies blog. Crayton’s website is https://rjcrayton.com, and she blogs at rjcrayton.com/blog.

Thanks to Heidi Garrett, heidigwrites.blogspot.com, for organizing the Kboards branch of the tour.

Strangers come for the child

An excerpt from Chapter 5, Root, Book 1 of the Peacebringer Trilogy

FIRST DRAFT of a partial rewrite – to be revised and copyedited Skopia tossed the mash in abrupt jerks. The chickens scrabbled for it, charging each other for the same bits of corn like there wasn’t plenty for them all to choke on. When Gunny pushed Mina aside a third time, Skopia booted the big white hen away. Gently, though she hankered to kick the devil out of something.

She shoved the cup back in the feed bin and took the egg basket off the hook. She had to leave the shelter of the wattle lean-to to get to the coop’s opening. If she had to build it again, she might do it differently. She hadn’t spent a lot of time planning–not that she could have thought straight so soon afterward–because she’d needed the steady sawing and chiseling and twining of withes to keep her hands busy.

And Ike brought one of them to the compound. END_OF_DOCUMENT_TOKEN_TO_BE_REPLACED